Let's start the year off bright and crisp.

fabrics you will need:

Pink tone on tone, and white. 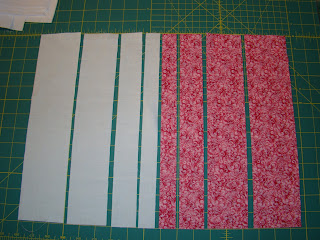 lay out your slices as in the photo below and sew them together. Make sure to alternate direction when sewing the strips together, to avoid distortion. 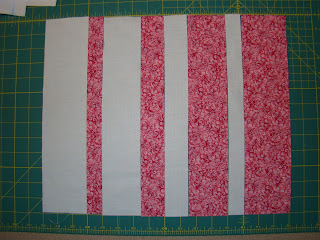 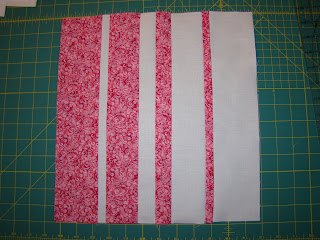 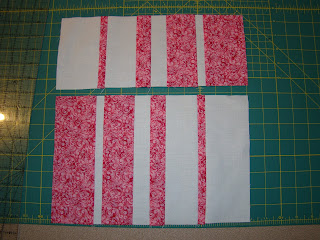 ﻿
Sew these together and here you have it. 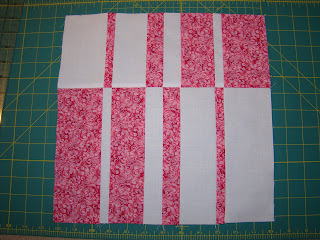 Finished block is 12.5" unfinished.
Have fun and make lots.﻿
Block lotto rules as usual.  One block equals one ticket, so make one, make two, make a while bunch. ﻿
Posted by Unknown at 19:30 No comments:

At our December meeting we enjoyed social time with games, prizes, treats, and of course - lots of beautiful quilts!

The 2018 Round Robin quilts were revealed!  Back in January six quilters each made a starter block and put it in a bag with some pieces of fabric (as much as they wanted to include). The blocks were secretly passed in rotation to the other "robins" who added on to them - sometimes using only the provided fabrics and sometimes introducing new ones - and the quilt tops grew. Every two months they rotated until everyone had contributed to all the quilts, and in December they were revealed - it was the first time the quilters who made those original starter blocks got to see what they had grown into. It's always fun to see the results, as they're all so unique! This was our second round robin - many thanks to Netta for coordinating it again this year!

Stacie's quilt and its colours were inspired by a fun lobster print fabric she included in her starter block. 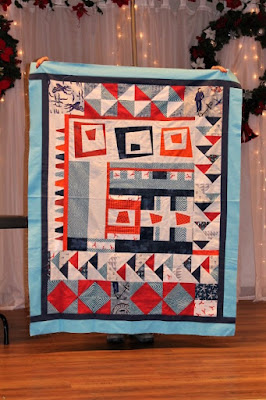 Esther provided a lot of colourful Cotton & Steel fabrics, and got a lot of different blocks and shapes. 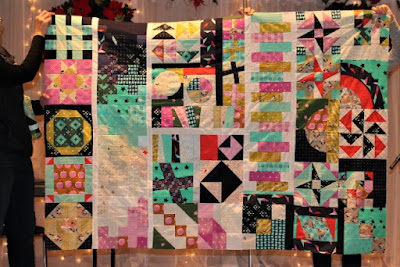 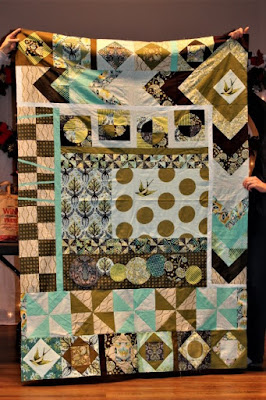 Kate's grew into a playful assortment of 'wonky' shapes and paper piecing in four Kona solids. 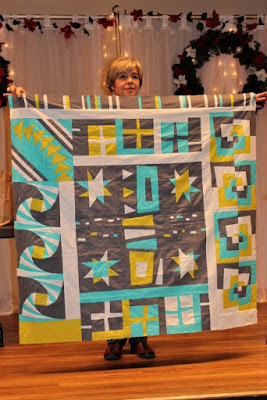 Michele's quilt of bright colours on black and gray was inspired by the prompt she provided: "stacked shapes" 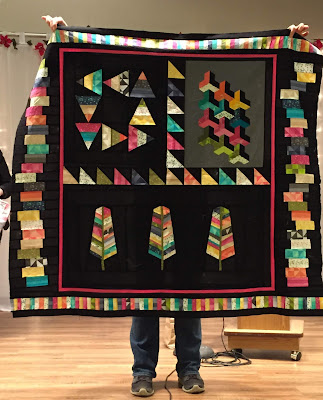 Netta asked for pink and gray on white... and she likes medallion layouts, so that worked out well! 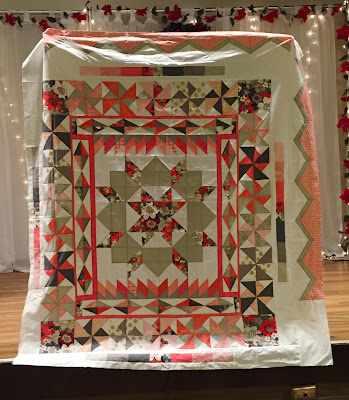 Here are the rest of the quilts we saw in December...

Remember all those tree blocks from the November block lotto? Natalie won them, and here's the completed quilt! 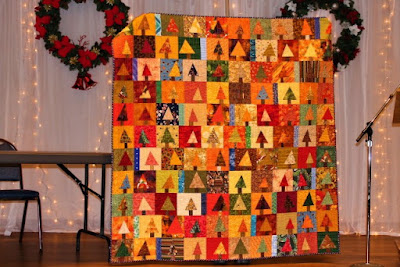 Kelly made a Christmas table runner - a good idea for whoever won the 2.5" strips of Christmas fabric in the games at the meeting! 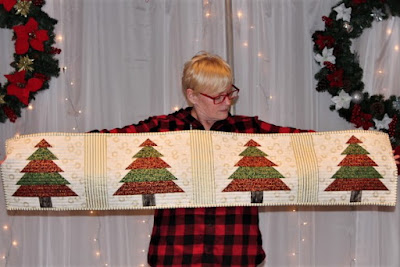 Liz made a fun mini quilt inspired by trees... 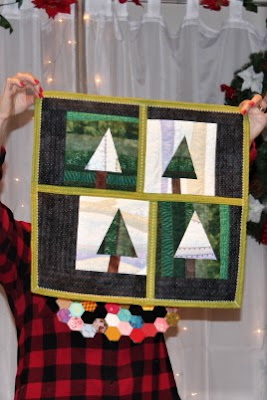 ...and this one, made with free fabric from the guild garage sale! 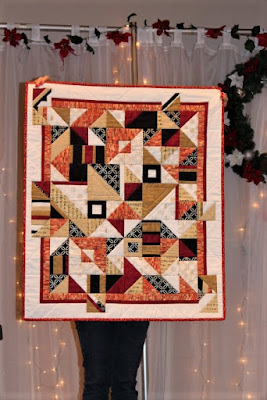 Rosalie returned from Arizona with lots of quilts to show us.
First this sampler... 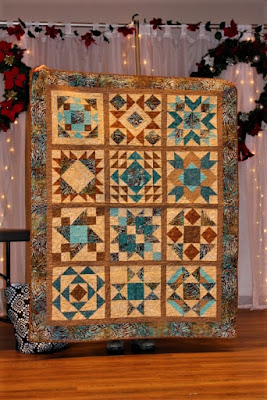 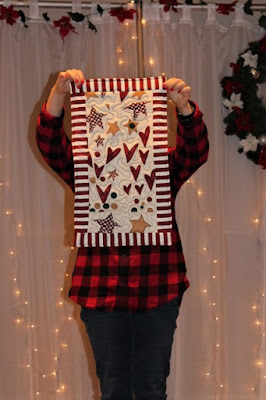 ...black and white with some colourful flying geese... 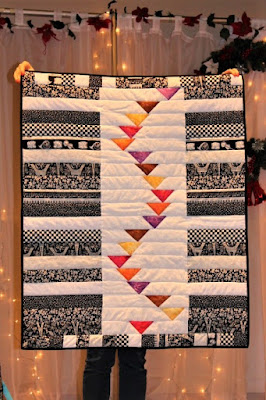 ...and a great twisty design. 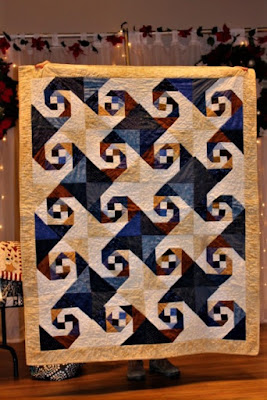 Kate set a goal of completing this Christmas quilt by our meeting date and nearly did it... at least the top got done! 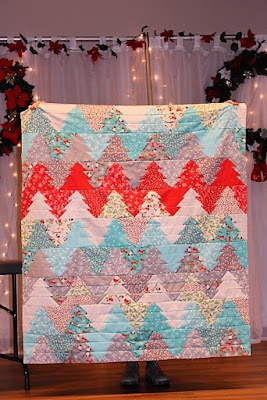 How adorable is Sharon's quilt - dogs in sweaters! 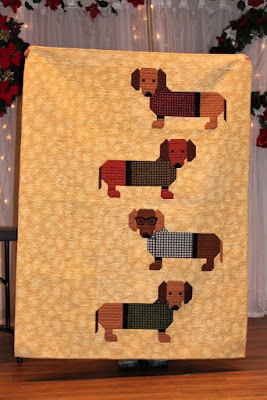 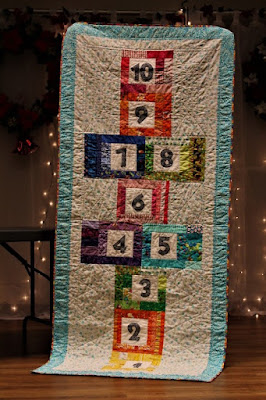 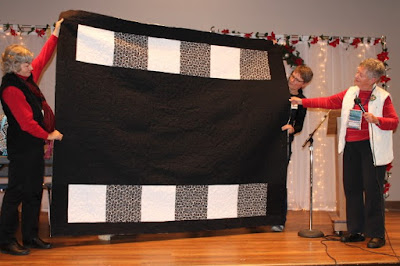 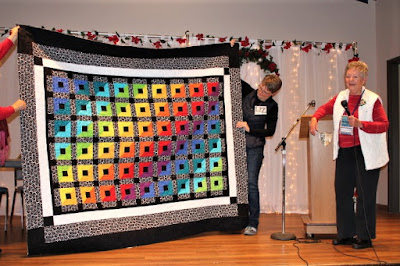 Our guild may not have been inspired by the "small piecing" theme for this year's charity quilts at QuiltCon, but Nicole was... she made a mini with teeny tiny squares. 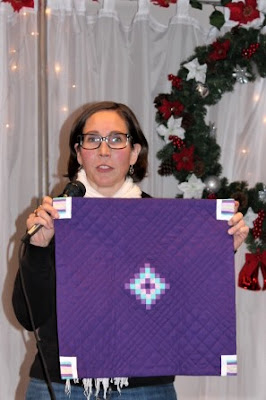 Nicole just completed a sampler quilt that she started in a beginner quilting class in 2007... 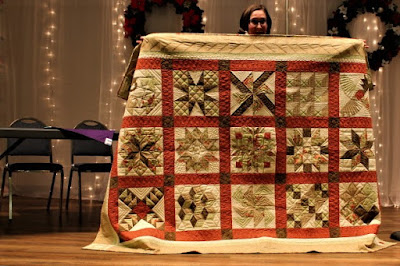 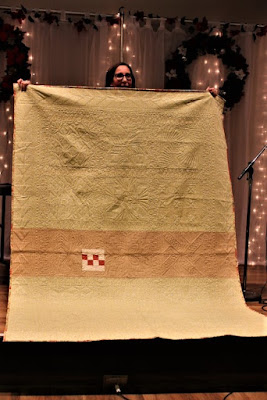 Posted by MQG Victoria at 17:44 No comments: