If you missed the March meeting, you missed out on a lot of laughs! – We had a collaborative, fun time. But more on that later. First up, Show and Share:


Dawna told us about her experience in the MQG mini swap as a “Swap Fairy,” and then showed us the great mini she received from the eastern US. 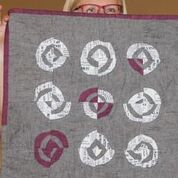 Dawna also made this for her much-loved letter carrier, who is changing routes. 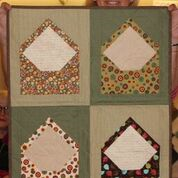 Natalie’s denim and yellow quilt made as part of the Mollie Sparkles Honey Pot Bee. 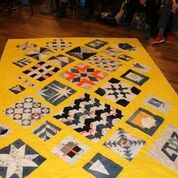 Susan designed her own animal patterns for this baby quilt. 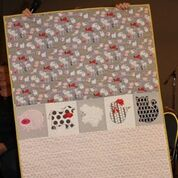 Fay participated in her first swap, and received this mini with a bird on it. 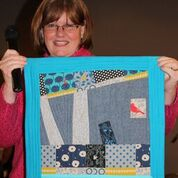 Barb joined a Transparency quilt along, and here’s her result. She also showed us the 3m Command Strips she uses to hang quilts – the Velcro kind are meant for hanging picture frames, and she has hung up to king sized quilts with them.

Kelly joined a quilt along last year and made this star quilt – the large stars are regular pieced and the small ones are paper pieced. The quilt has over 600,000 stitches of quilting, and it was accepted into the Quilt Canada show. Yay, Kelly!

Stacie also participated in the MGQ Mini Swap – she told her partner she likes Alison Glass fabrics, and received this great mini. 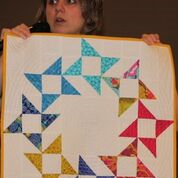 Here are the block lotto blocks, won by Esther: 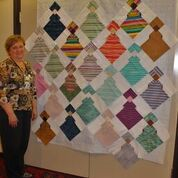 Many members brought their favourite – and least favourite – notions, and told the group why they feel that way about them. It was interesting that many of the notions or tools mentioned generated both love and hate, as well as some hilarious comments! (a demonstration of the problems with the Bernina knee bar was particularly entertaining) Some were brought up more than once, and many of us were introduced to new items we hadn’t seen before. Here are some of the tools mentioned…
And a few unexpected favourites:


Do you have strong feelings about any of these notions, or a favourite of your own to share? Let us know in the comments!