Show and share was a doozy this month with so many sharing their creativity!

Sharon C has been away for a few months and had many things to show us...


And now it's time for an update in the saga of Ursula and her unhappy quilt. A long time ago, when the Victoria MQG was just a tiny new guild and we all still fit in Satin Moon, Ursula brought a quilt to show and asked for advice how to quilt it.

We gave her suggestions and off she went. Then the next month Ursula showed us her finished quilt but she told us of the trials and tribulations she had had with it. First there was a blood stain on the white that set. Then in washing the blood out, the colour ran. Colour catchers were able to save most of that problem. Then when the quilt was all fixed and finished, Ursula spilt her green tea on the white.

Which brings us to now. Now Ursula has three stuffed dogs. 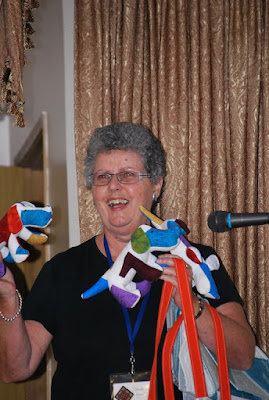 
You guys are awesome, thanks for sharing with us!

Natalie was thrilled to win the block lotto: